By buying this product you can collect up to 179 loyalty points Your cart will total 179 points that can be converted into a voucher of 7,16 PLN. 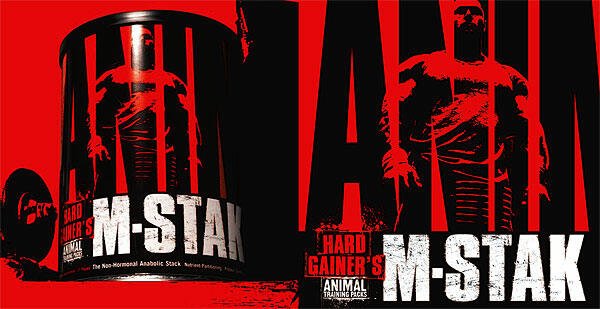 Universal Animal M-Stack - There is no doubt that some of the best, strongest, underground, anabolic "supplements" have originated in Eastern Europe.

FREE OF PH! Prohormones such as androstenedione, were used twenty years ago by Olympic-caliber athletes East Germany, who used this measure to increase strength and performance. Tribulus, another measure erogeniczny, was first used by Bulgarian powerlifters to shatter world records.

The next biggest secret may have come from the Netherlands. After five years of research and development at our European labs born Animal M-Stak.

Prototypes Animal M-Stak were first tested by elite bodybuilders and strength athletes. The results were sudden and quite amazing. Lifters were able to lift heavier loads. Bodybuilders found it easier to pack on quality muscle.

Mr. Universe and Mr. Europe, Giovanny Thompson, had this to say: "I love the Animal M-Stak. This is the strongest muscle-building supplement I have ever used." Another athlete who wished to remain anonymous, told us that he could not believe that we were able to create something stronger than the Animal Stak ™: "I do not believe that you can do something better than Animal Stak, but.

Both are highly anabolic nutritional supplements created for strength athletes at the world level. Both rely on an exclusive dual testosterone and growth hormone, which is present only in supplements with the Animal name. Both contain effective blockers of estrogen, so that the gains are the maximum.

There is one fundamental difference. Basic Animal Stak anabolic effects come from its ability to directly influence the synthesis of anabolic hormones by converting into such hormones. These anabolic hormones then produce the desired effects.

And because Animal M-Stak ™ is able to meet these goals without steroids, such as 1-AD or 19-norandro, Animal M-Stak is perfectly suited for lifetime natural bodybuilders and powerlifters, as well as other athletes who have to undergo tests on the presence of doping.

Your workouts are intense and demanding? You feel weak and bad sleep? The solution to your problem may be precisely this formulation that was designed for people practicing martial arts! A positive effect on the quality and depth of sleep, so that the regenerative processes can occur with full speed!

High-quality extract of Tribulus Terrestris regulates the work of hormones responsible for improvement of physical performance and mental body and improves libido by acting as an aphrodisiac increases the sexual desire.